The 500 creels are on hold till monday now. Just spent the afternoon,and most of last night, coughing and coughing and coughing. It is the same at this time every year. The Easter fortnight always means a big influx of visitors and as they leave there are a lot of Applecross residents going down with bugs colds etc. Our immunities are not so strong at this time of year and we seem to be more susceptible. I’ve been fairly immune to this but not this year.

Being a bit less active the last couple of days thoughts and conversations have turned to community matters both general and specific. Alison has been to Inverness twice this week, firstly with Caroline meeting representatives from SSE and Community Energy Scotland (CES) to discuss our connection charge. It was a very productive and helpful meeting with the only consideration for us that it should have been held a lot earlier and we would have a much greater knowledge base and could have saved a bit of time on the hydro development. The result is we are re-applying for a split phase connection which will produce 90 kw as the line reinforcement is too costly. It has always been a bit of a conundrum where you apply to a company to use their system and when their system is not up to standard you have to pay to upgrade it and they make more profit from your effort. I suppose this is the corporate world and the bottom line is all that matters. The other mini conference was yesterday and there was a talk about utilising water resources by a prof who opened his talk with a series of circles of importance. The innermost circle is me then the one outside that is the family,then the community you live in, maybe the next one is your country and finally the planet. At the end of his talk about resources and how communities could and should operate he returns to his circles to illustrate how the circles should be. The innermost circle this time is the planet,the most important, and thus all the way out to me in the outer circle. This along with listening to Billy Bragg this morning on Radio4 with another guest, Ben Rothman, whose father led a march on the peak district to demand access to ramble. This was in 1932 and he was only 20 when he got 500 people out from Manchester and Sheffield. Sometimes although we can walk on it there is very little else we can do with our own land. This all fits the philosophy of community work and its raison d’etre. Reminds me of the Objects of the Applecross Community Company which is encapsulated in the following. “(its) purpose is to follow the principle of sustainable development where this meets the needs of the present without compromising the ability of future generations to meet their own needs.” This says it all very eloquently. It is always frustrating when you come up against policies and working practices which thwart community survival for their own gain.

Enough of that the wormery is up and running despite a small over-night hitch. After picking up the worms on the way home on thursday night I opened the package to check them out ,closed it up or so I thought and went off to bed. Next morning all is well until I noticed a worm on the kitchen work top and that’s when I got my eye in and ended up picking up about 3 dozen escapees. Got away with about half a dozen casualties. 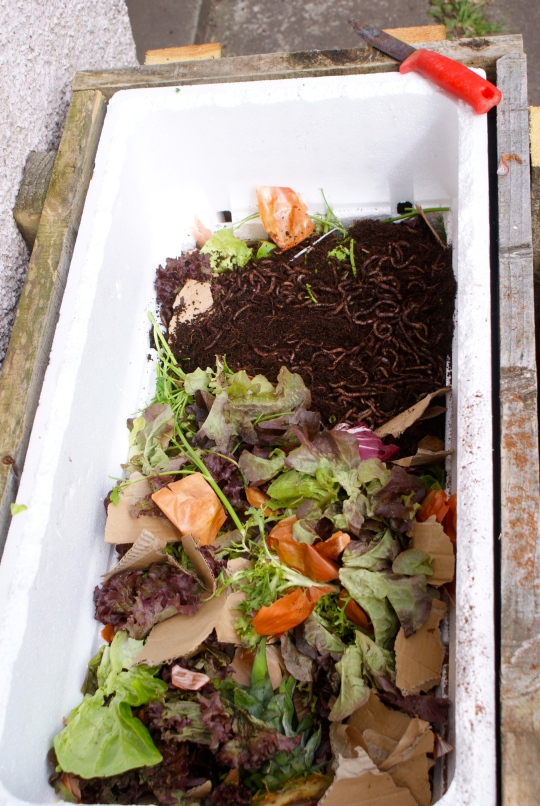 So with a visit to the Inn for greens, a bit of cardboard some shredded paper from Norman the worms entered their new home. All seems well today with only three or four casualties in sight. The rest is out of sight hopefully munching their way through all the waste.

Managed a great new walk set up through the ALPS programme, a posted walk through the wood at Carnoch, reputedly one of the oldest hazel woods in Scotland. It’s a beautiful,peaceful and still place where the stones are covered in ancient mosses and lichens. 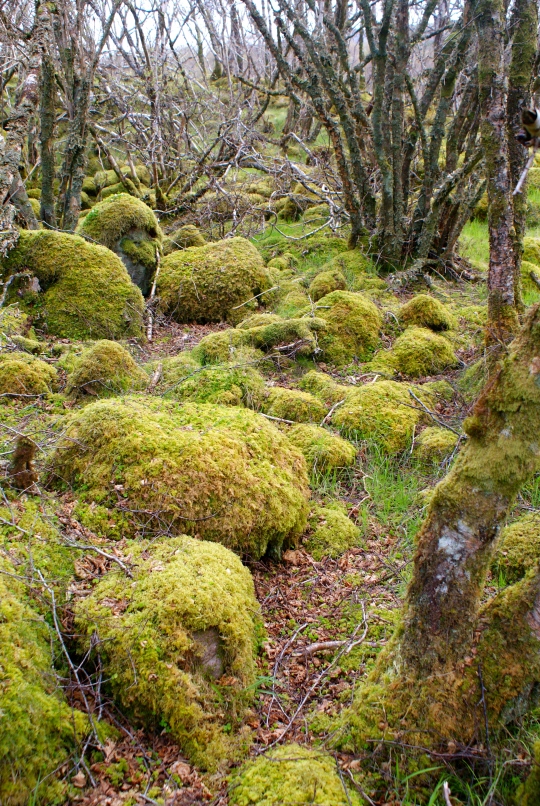 Yesterday I went out a bit earlier than usual to catch the quiet morning before the afternoon northerly breeze got up. Even after 30 years of fishing from Applecross some days are beyond any description I am capable of. The sun was well up and there were a scattered array of clouds creating a moving tapestry of shadows across the land. To the south-east you could see the Five Sisters of Kintail like an etching, to the south-west is the Red Cuillin and I cannot resist taking yet another photo. 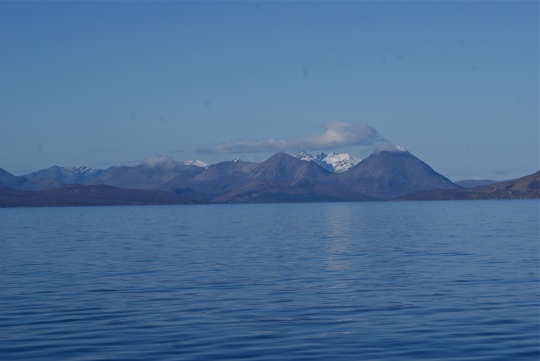 The dusting of snow still on her with the remains of the morning cloud above the clearing shadows are wonderful to watch. Then to the west you have the Island of Raaasay stretching up the Sound with its distinctive table top of Dun Caan in its middle. You can see the Harris hills through the Blind Sound. Off to the east its home dominated by the slightly foreboding or maybe protective Applecross hills. Perfection and a privilege to be here. Work is not the right word for what I do on days like this.

It was a long day and 500 creels were hauled and although the fishing was poor it did not seem to be important. We take each fleet of creels ashore once a year to wash and do some repair work on them as well as sorting out some splicing that builds up over the year. There is an interesting small crab that we seem to be catching more of recently. It never grows more than 2.5 centimetres. This is it beside a squat lobster and it looks as though it could handle itself. 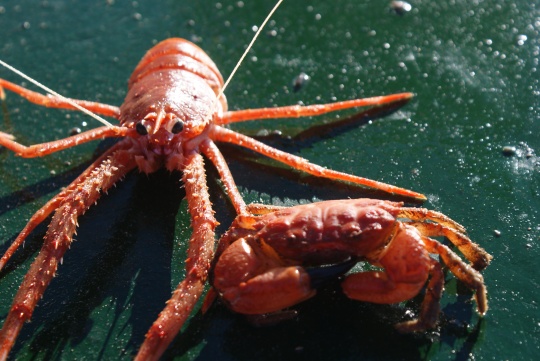 The evening shift at the Inn was a bit more relaxed with everyone enjoying the fantastic food. Judith took the evening off which is a good sign we are doing something right. A beautiful sunset had people leaving their meals to take in yet another wonderful Applecross scene.

After a day working on the pier sorting out my creels and trying to sort Dougal out it was back off to the Inn for another shift. These evenings are special to the people eating and staying at the Inn. There was a family from East Lothian who could not say enough about their evening’ experience and to be quite honest I was probably enjoying it as much as they were . They tucked into some large prawns I had taken ashore two hours before they ate them. It gives me so much pleasure seeing people enjoying themselves so much and it reminds me of being told once that if we honour and respect our food then it means so much more to us.

The evening finished with another spectacular light show. I dislike intensely that corruption of the english language, “shock and awe” and awesome is over used so much these days but this scene looking across the Sound from the Inn does instil in me a real sense of awe.

On the way home the local network alerted me to the possibility that there was a delivery of worms waiting at the shop. Dai the Post is too wary of Dougal and family’s intentions when he has tried to deliver mail in the past so we pick ours up and sure enough the worms were there so that is tomorrow’s job along with another 500 creels. What a life.

Board Meeting,Compost,Worms,Party and a proverb.

Although it is pretty quiet on the fishing front there has been a lot happening in the last couple of days starting with A Community Company Board meeting at the Inn. This was attended by Ron Gilchrist who was scheduled to hold a workshop at the Hall the next day. The agenda showed how much the Company is working on. We are trying to make Applecross more resilient and a bit less reliant on food and fuel being constantly being trucked in by road. This is going to be reflected in the Walled Garden’s new chef Aron. He is hoping to use as much local produce as possible. The Inn also tries to use seasonally produced food both from the sea and land. The Hydro scheme is still progressing although negotiations around the lease could be going better. Our attention is turning to The Coastal Communities Fund which we hope to access this year and the aim of this fund is to increase employment and sustainability. We hope to improve our broadband capacity from a miserly .39 of a meg speed to around 7 megs, progress the Hydro further, keep trying to set up a wood-fuel supply and look at the possibility of improving housing on the peninsular. It was a very positive meeting but also we recognise we have many problems to overcome and have to work to change mindsets that are lodged in the past.

Ron Gilchrist’s day at the hall was fascinating basically telling us all that we have to have a rethink on how we compost. Just about every-one has the black plastic bins and if anything like me just put layers of material to decompose or as Ron said rot in them. As a result of his talk there are going to be a few Hot Boxes built along with some Wormery Boxes set up. He is a big advocate of rock dust as well, specifically basalt. I have come across this before but Ron was very persuasive about the results of mineral deficiencies in the soil both in the quality and taste of what you grow. I am always interested in a stronger local economy which does not necessarily means a poorer quality of life. Again we are back to changing mindsets. All these local changes are going to take place against a backdrop of peak oil and the fact that economies cannot keep growing in a finite world. Takes me back to the conversation I had with Ruth about sorting ‘self’ out and if theat is successful you do not continually want more.

Off to the Inn for a shift,but not before calling in at 6/7 for a lovely piece of lamb and sundries cooked by the eldest. He really is not that bad a cook. Food at Applecross parties is probably the best. The party went on till the wee small hours and judging by the condition of some of the guests staying at the Inn this morning, who had gone along there was a lot more than lamb being consumed. So glad on the morning after when I see the damage emerging from the parties that I’ve given up trying to drink. Gave it a good go for 25 years so can’t say that I haven’t tried. Today was taken up with reacting to our grid connection news and the next steps.

I have come across this proverb before and it seems so relevant to our material times,

“Treat the earth well. It was not given to you by your parents. It was loaned to you by your children.” Ancient American Indians knew where they were coming from and I think we have lost sight of it a little.