After a busier than expected shift at the Inn but still quiet, bit of banter about fillet steak, whether one was enough, an early night for a quick pack and hitting the road for Edinburgh on Thursday morning. This time for another fishing meeting. Quick nip up to the accountants with more papers before catching the train south. Sleep a lot on trains so short journey and arrived in plenty of time for meal and a few red wines. I always compare food to back home and when away realise fully how fortunate we are in Applecross. What probably used to be half decent food is now shown up to be really quite poor. The wine flowed just a little too freely and the morning part of the meeting had a bit of a recovery mode under way. I seem to be misjudging this alcohol lark, having read recently that the dry time between New Year and Burn’s Night is called the Scottish Ramadan.  Head of Marine Scotland was there for part of the morning. 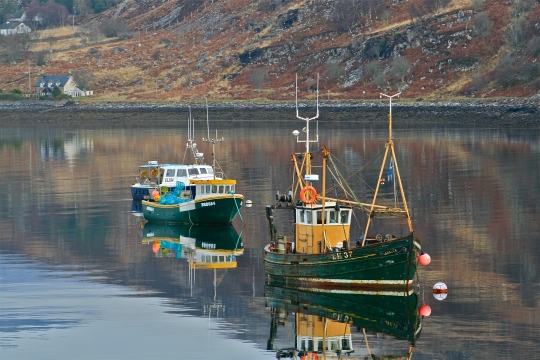 Couple of local issues, seems prosecuting trawlers who tow away gear is going to remain almost impossible but there may be a closure of the Inner Sound to most mobile boats and set up a Community fishery. So some good maybe. Very frustrating to listen to civil servants saying they will help and take the fishery forward but when it comes to micro managing the gear conflict they wring hands. There was a prima facie case inside the Crowlins a couple of years ago and the punishment could be seen as a deterrent but Marine Compliance stated there was not enough evidence and that was without interviewing anyone involved in the incident. So maybe not a lot of movement there although there is a case slowly edging to court in the near future on the east coast. Although the proposed closure on the Inner Sound is not a complete closure as the boys from the south have taken a step back and included local mobile boats it is a step in the right direction and if done with permits and monitoring the closed area for improved stocks or otherwise. You keep going to these meetings and wonder sometimes what the point is but when you hear about the perilous state of the European fisheries you do not want to go down that road. Also there is a delegation invited over from Norway this Spring to the Inshore Conference at Inverness. Invited by Marine Scotland and will be good to hear what they have to say, having a four mile no mobile limit around their shores. Cracking cod and saith industry as a result.

So then it was onto Glasgow by train. A city that I am learning to like a lot with all its contrariness. The taxi driver was extremely suspicious of the address I gave him as it was in Townhead. Did not mean anything to me but he reckoned it was a rough run down council estate. Turned out fine and think it seemed more students than anything. Our first AirBandB did not get off to a good start mainly due to lack of mobile phones in the Macleod family. Spent a couple of hours waiting for Mohammed to turn up but it turns out he had already instructed us what to do by email that morning. Found out soon enough and Tom Russell was next on the list. Brilliant concert full of banter, humour and great music. Immense lyrics and finished with his now so prescient song, “Whose going to build your walls?”, written ten years ago. Think it was becoming a bit of a burden to him but it involves a great sing along. https://www.youtube.com/watch?v=-9bgmi0I5hY. Next morning it was down town and Glasgow shows her many sides. Opposite on the door step is an empty bottle of Buckfast.

As we head down past the tower blocks on a beautiful morning we hear the band, 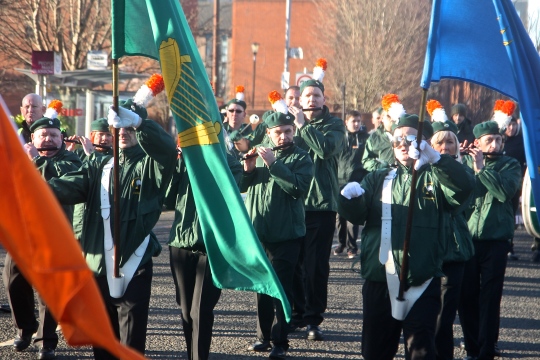 at first we thought Orange but it was  of the Irish persuasion.

As we were passing the Tower block we heard a scream of “Away tae f%*k ye”.

We just cracked up although living with that may not be quite so amusing.

The marchers certainly looked serious enough. In fact I did feel a little intimidated taking a few photos but got away with pretending to be a tourist. Into town, passing a beautiful mural,

lunch and back to the BandB for a quiet afternoon before the evening’s entertainment.