What a day to be out on the water. Blue sky and still waters and the prawns are still going into the creels although the berried ones are increasing on every haul. The larger prawns seem to have disappeared but all’s still well. Yesterday was my first big day in becoming a beekeeper. I went over to Audrey’s with Tim’s hive and after having a look at three of her hives including the one she split in June. So much to learn but it is interesting to hear the different ways of looking after the hives. Audrey does not concern herself about whether she finds her queen in the hive but knows by seeing the eggs and grubs under way telling her she has a fertile queen laying. When she split her brood frames she thought that her queen had gone with them but either way the workers rear a new one , they are amazing. So I transferred the bees to the hive and am leaving them for up to two weeks, wait for an evening call and head back over for the hive and then back home. 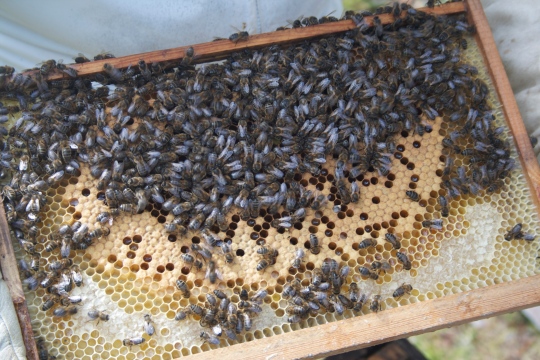 This a really healthy frame with eggs, grubs, capped cells and lots of honey and all the frames we saw were in great shape.

Audrey really does not want to go into the hives too often and is very careful about the weather conditions as well. Seeing how the bees react it is not surprising. They do seem to be fairly gentle bees but they do get cheesed off when disturbed. 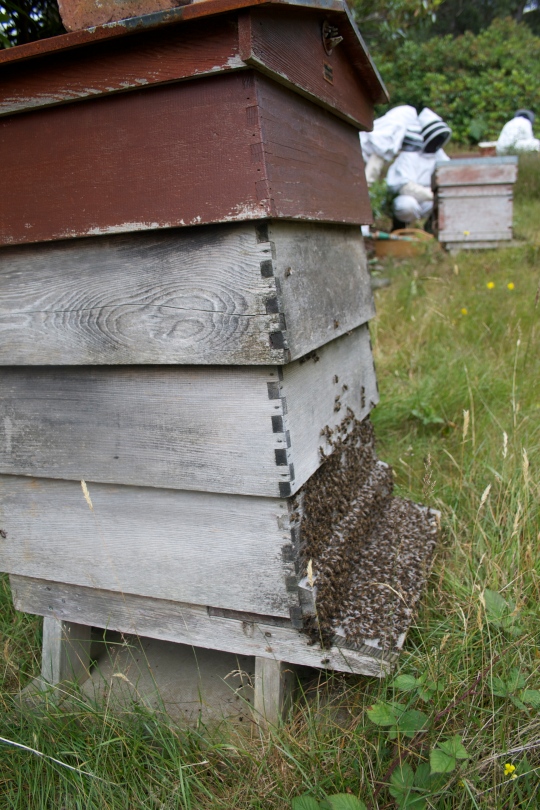 A trip to the shop.

At midday I set off to the shop with Dougal and family to pick up the paper and an other excuse not to look at long over due paper work. Lovely weather, getting used to this, and the view across to Ardhu was lovely. Took this from the boat last friday.

Met up with Gerry at the bottom of his drive where we discussed the GP situation at a fair length. The problems over accommodation and the hopes and fears of the community about the uncertainty of the situation. Wide ranging conversation which centred on the main problems of the future of the community, the need for young people to come in to the area, the status quo being unsustainable. The back drop is a falling school role and if that continues all the public money that is being attracted to the place at the moment will be worthless if there is not a viable community to welcome and look after visitors and look after itself. Jill, who has a house on the shore just down the road, came along and joined the discussion and the chat veered in the direction of septic tanks and their reconstruction. After a while we set off down the road chatting about various bits and bobs finishing with me giving Jill the latest Olympic results. She has had no communications over the last 36 hours so was delighted to hear about Andy Murray et al. After Jill’s, Ali and Lesley were on the corner and that meant another stop for a chat. After a catch up about Lesley’s improving health the conversation turned to times gone by when no-one locked their doors and people even went into other people’s houses to make themselves a cup of tea! After Ali went off to get something for Dougal and co it was off up the brae to the shop but not before stopping to pass the time of day with Ewen, Ali’s brother.It was another trip into the past when , as always, he asked after my mum. He then tells me what a good nurse she was, doing so much more than her job in looking after his family when his mother died when they were really young. Conversation touched on how we should keep talking about these people and in this way even if they are long gone they still stay with us. I suppose what we were doing was a form of oral history and reliving a little of the past through each others memories. 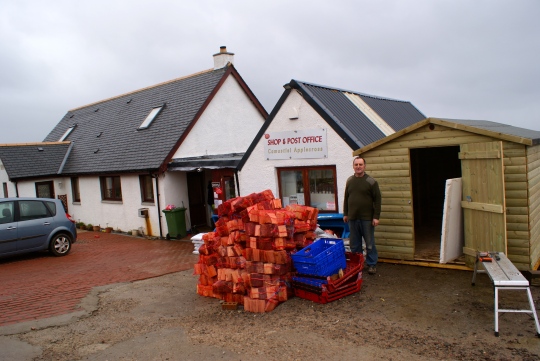 Finally it was to the shop and after being told off by James for not looking after Dougal properly it was off home. A couple of brief stops on the way but made it home just before 2pm. That was almost 2 hours on the road to a shop about three-quarters of a mile down the road. Sometimes it is good to forget about time and just enjoy. There are many pictures of, mainly the men of Applecross, just standing at a wall or at some-ones house passing the time of day. I call it living. Managed to stay away from the books a bit longer by making up some frames for the hive as the plan is to head to Kyle to get some bees put in their new home. Plan to leave them there to settle and pick them up the following week in an evening