On the way up to the inn on Wednesday looking north to the “Blind Sound” with the northerly breeze blowing, bright sunshine and a haze appearing across the water stopped for a photo and time out.

Through the Gap you can see the cliffs of Staffin and further off the Harris hills. Later, after taking Aron a lift home on the way back up the road the Chamain was looking so peaceful and this was at 10.45pm. 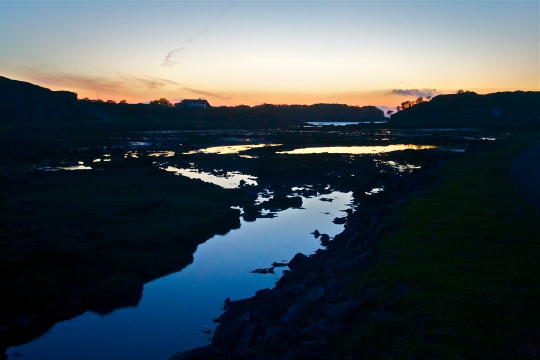 Dougal thinks he is tucked in for the night on the couch after collecting his seven ticks for the day.

Yesterday things ground to a halt, well they did not start as I woke up with a migraine well under way. Without going on too much about them they stop everything although this one was not too bad to cope with as I had missed the start of it and was comatose for about 6/8 hours yesterday while it was under way. Another added bonus was that I was only sick twice…so a good migraine but work out of the question and fretting over missing out on a beautiful day on the west.

The contrast this morning was complete, as at seven taking the dogs out for a wander over their domain,a listen to a Mhairi Campbell/Dave Francis composition, and then down to the pier for a day’s fishing on the Sound. 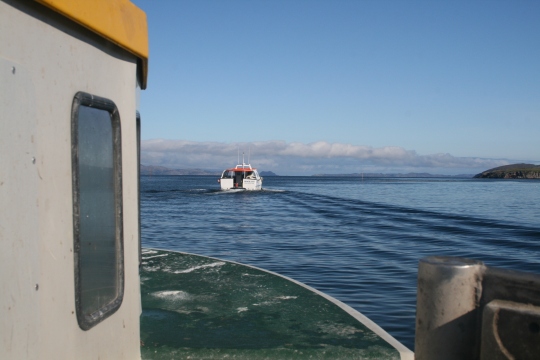 Most of the fleet was away at the same time this morning apart from the consistently early Kingfisher.

As expected the northerly breeze was up quite early and it was hard work but balanced against yesterdays fiasco it was a good to be alive day. Managed 400 pots up as I was trying to keep the Inn going for the weekend. I know they do not mean it but it is a little off-putting hearing some visitors complaining that they had travelled 400+ miles for the langoustine and why are they not on the menu. Explaining to them it is not a super market aisle that we go down and buy them off the shelf can be taken the wrong way. I think it is just symptomatic the way people live now. If they want something they just go out and buy it, and if they can’t, they don’t understand why not. My day was cut short, as I started hauling my last fleet of the day, a hydraulic pipe burst so it was away in with a few more prawns than expected. The weekend should be sorted at the Inn and we have some hanging in reserve over the side of the Varuna. Funny little moment occurred when hauling a fleet at Sand noticed bait not as I had left it and jumped to what turned out to be the wrong conclusion….some pirate was hauling my gear. Easily solved when I called Billy at Sand to see if they could track any new boats in the area. Hardly finished conversation when another boat called up, a little sheepish saying it was probably him as he was hauling another boat’s gear by arrangement and realised half way through the fleet that it was the wrong one. We have a good community of fishermen and it is good to know that there are no rogues at the creels and there has n’t been over the years I have been fishing….other methods of catching prawns has it fair share and just about to a man none live locally. It was around here a butter fish came up in a creel. Always good to say the fish I take photos of and do not keep to eat go back alive over the side. We do not do discards working the creels.

So left the Inn and some happy chefs cooking off langoustine, tails and squat tails. Alison is over in Skye at the Community Land gathering and will be meeting up with like-minded guys and networking, as one does. It is always good to get out to keep one’s perspective. The LRRG’s interim report has had a bit of an all round panning in the press and at Edinburgh. It just seems to concentrating purely on community ownership of land and there are so many more issues to be addressed than this. But it seems the prediction is that any reforms remain untouched until after the 2014 Referendum so as not to rock any establishment boats.

Who would have thought that Jeremy Vine would be mentioning Treacherous Orchestra on his prog, but that was the case today. Been listening to two fabulous new albums this week, Adam Sutherland’s Squall and Hugh Lawrie’s Did n’t it Rain. That as well as watching Nashville there is a little burst of good new music about just now.

Home from Edinburgh after a fairly stress free couple of days that went very smoothly but it was just as well I had very little expectations. I left about mid-day yesterday and headed for Glasgow to pickup son No3’s kit from his ex-flat on Argyll Street. The weather was beautiful going through Glen Coe, past Loch Lommond and even into Glasgow.I do live in a stunning country. I made it to the flat with only one minor detour,getting back out was the problem. You have to understand I am a country boy, no sat-nav and a borrowed uncharged mobile. About half an hour later after visiting Central Station, Queens Street, Alan Glens school and the Caledonian University I eventually found an M8 sign and made it out of the mayhem that is a Glasgow rush hour. I did feel like a ‘teuchter’ from the Highlands…I suppose I am.

Through to Linlithgow and although I was greeted by a man touting a gun it turned out it was to do with chicken protection and nothing to do with my arrival. Lots of conversations sorting the world, Scotland and Applecross problems punctuated by a Thai curry of squats and prawns meant the evening flew by. The evening concluded with a walk round the small holding and saw the last episode of The Bridge…The Scandinavians do it well. A sound sleep on the couch after a planned assault on Edinburgh the next morning.

This is the first meeting of its type I’ve been to and to be quite honest there was nothing inspiring about it. We are a difficult group to manage but I did think the quote of the day was incredible. Bear in mind that he was talking about the static gear inshore fishermen and he is deputy head of the government department that is in charge of us.”To be fair,Marine Scotland did not know about you.” I did not pick up any actions taken forward from the meeting and I found a lot of the reps there were contradicting themselves, some saying stocks were as good as they have ever been but then saying they could not afford a day of. lots of stats about how much money the inshore fleet is making, but no recognition of the favourable exchange rates that distort the outlook. We are going to get a conference that is going to “celebrate” our industry. Sorry for being so cynical but I think making a mess of our environment is nothing to celebrate. There was lots of discussion about micro-managing various disputes and local difficulties but that was not what I travelled 600 miles for.The possibility of a static gear federation was discussed but not taken forward. It did seem that the important feature of the day was to set up a process where you were able to speak to the minister in charge. I did ask for a policy or a mission statement but was told there was not the data to support my claim that stocks locally are on the brink. White fish was not even mentioned so we are celebrating the process of fishing down the food chain and now all that is left is the bottom feeders. Speaking to a rep from the Clyde, a rather unsettling area to work. There were two students who carried out work on trawler discards over a 10 month period and he claimed even after a bit of positive massaging by Seafish they worked out through sampling,weighing and sexing the fish that 31 and a quarter million fish of 67 grams in weight were discarded dead in order for them to catch their prawns. That would be regarded as criminal in any other industry. So no I am not hopeful but I will still attend because that means I can moan about it.

Another amazing drive back up the road. I find as I get closer to home I subconsciously drive quicker, just to get home earlier. Another stunning sunset and a welcome from Dougal and family. He is adorable and it is just as well. They are getting their paws walked of as boys No 3 and 4 are home just now.