Too much to put down in one post to describe the last three days. The morning, teeming down with rain saw me knee-deep in sh**e but good sh**e. I was up at the farm bagging some rich, and mature cattle dung mixed with straw and ageing well. Some of it had almost returned to a rich dark loam. So a shower and a couple of paperwork jobs, visit to the bank in Kyle, and I was in Armadale,old pier, with 15 minutes to spare. Luckily some one else had some modern technology, a mobile phone, and Tekela discovered we were going to Doune in Knoydart via Mallaig as it was a bit rough for the Doune ferry. 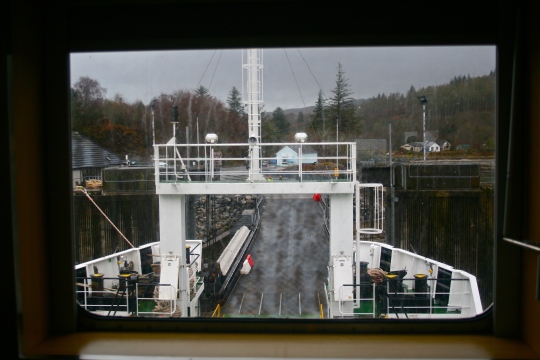 Tekela and Ollie had come from Raasay and we headed back to the new pier and the coffee shop where we met up with Davie, Christine, Avril and Elgar. Soon on board the Mallaig ferry in the lashing rain. Weather had quietened down a bit by the time we got to Mallaig and we already had a good conversation about the sad state of the fishing in this area. There are a few prawn boats in the port just now but seems only for a few weeks when it will be scraped clean. Came up in several conversations, unprompted by me but certainly I contributed, and related to ex fishermen was whether in Mallaig or Islay there were former fishermen who were now unhappily working in cafes and distilleries. A fate for most of us if we do not get our act together soon.

It was straight onto the Mary Doune, Andy waiting on the other side of the pier, and on to the Knoydart peninsula. 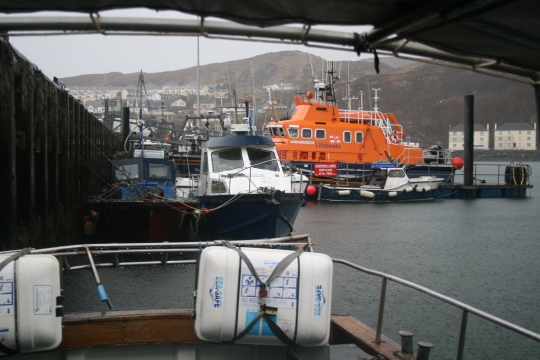 The Mary Doune and the second boat Gripper II were both fitted out at Doune by the guys there. Honestly, I was genuinely excited to visit such an iconic part of Scotland, so near to me but never set foot on during the last half century. 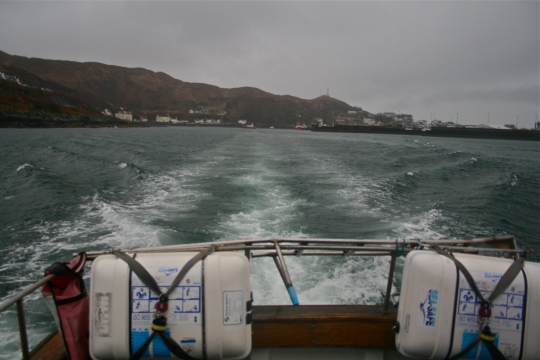 And out of the mist the little habitation of Doune emerged. Ashore with no fuss and we were taken to our rooms. Built up over the years the group of buildings consist of a boatyard, three houses, a dining room, one wooden and two stone lodges, all within a ten-acre part of the area. The chairs faced the window. This was the telly, radio and internet for the next two days.

I don’t own a clock or watch so ended up being late for the first meal and was called to order by Davie. Food was amazing as was the atmosphere in the dining room. We have power till 11.30pm as Knoydart is off grid and Doune is powered by generators although I believe that had no effect whatsoever on the party in the wooden lodge. I had scored in that I had a lovely double at the end of the wooden lodges to myself as Alison was too much under the weather to make the journey and it was so quiet, falling asleep to another Anne Holt Nordic Noir. This meant I was in a lot better shape than some of the rest of the team and was up bright and early for breakfast on day one. The main thing I get from these gatherings is inspiration from a group of like-minded people who are all working within their own communities and coming across the same problems that we do in Applecross. I love all the connections that we have. I reckon two years ago I did not know a single resident in Mull, that has changed and Colonsay and Islay have now joined my growing list of contacts.

After a fine breakfast,where Donald from Colonsay had his first ever poached egg, and he was not the youngest chap in town !! we settled down to listen to the story of Doune. The site is possibly the oldest on the peninsula and is a Pictish vitrified fort of 3/4,000 years old. In 1853 the village was cleared, the largest village on Knoydart and by 1860 the population consisted of a shepherd’s family of 8 down from 130. Doune lay empty after many shepherds until 1982 when Alan and Mary came when they rebuilt the ruined white house, built a pier, slipway and a boat The Gripper. By ’92 Andy and Liz had joined and they had expanded and began rebuilding the Eda, a decommissioned Danish 60ft fishing boat. Disaster occurred when a fire struck and destroyed the boatshed and ruined the Eda. This is where Davie came to Knoydart answering a call for volunteers to help rebuild the Eda. This is one of the highlights of the couple of days when Davie recalled those days and suddenly became so emotional that he could not speak. Thinking back on those days and he is still here working away for his community, just a good guy. I found all this, the story and the place very moving and found myself agreeing whole heartedly with Davie that this business was not grown on any “known business model”. I found myself thinking about the Varuna and The Applecross Inn and similar “businesses” where making money is not the key aim but quality of life is more important. We had a discussion that it really was good business model but I for one could not put Doune on a spreadsheet. There was too much love and feeling put into the business to be able to do this. I found this thread ran through the whole time I stayed there.

This site uses Akismet to reduce spam. Learn how your comment data is processed.