Company AGM showing there is Applecrosslife.

The Community Company AGM took place tonight with 45 people attending, with another 8 apologies, at the Community Hall. With all the speculation, rumours, press attention, there was a degree of tension among the directors and LDO. This had been dissipated somewhat by our meeting of the previous evening where we arranged and organised the AGM meeting. We have never claimed to be greatly interested in the area of governance but know it is very important.Looking round the Board of fishermen,chefs,hoteliers child carers,engineers and craftsmen and now a life coach no one has that interest but help was offered from the floor. The evening began with a showing of the CES video Alison and I had seen on the second morning in Perth celebrating 10 of Community Energy Scotland. It showed different communities around Scotland,volunteers all working with the same aims in mind, all wanting to increase the resilience of their communities, all wanting to make them a better place for every one to live in. Judith, as Chair, then presented her report and you did realise what an impressive year we have had, the Community Broadband Scotland has been announced and this coupled with our other funding should ensure decent broadband for the whole of the Applecross peninsula and maybe include other communities nearby. More on that when press embargoes are lifted. This project in itself will open up possibilities for home working that would have been unthinkable with half meg band width. The Filling Station is still a success although the volunteers know the onerous task it is to keep it working. If we had a decent software system it would be so much easier to run. It still functions about 95% of the time but needs rebooting on too many occasions and we will never know how many sales we miss out on when the system crashes and we are not told about it. We have not had it signed over yet as we have not accepted that it is fit for purpose. Gilbarco are still working on a solution and this will be a relief when supplied. Climate Challenge Fund has been used successfully over the year mainly to progress the Hydro scheme to the lease signing and planning stage. The Company is now working on applications which hope to reinstate The Coal Shed Pier with Highland Birchwoods and Prince’s Countryside Trust for funding for a support worker to look after the elderly. The LDO report followed and the fact that it lasted over 45 minutes showed how much has been achieved and also how much has to be done so this community can survive healthily into the future. Similar problems are shared among all the communities we are getting to know,problems of housing, income generation, declining school roles and everything I have mentioned before and will do again. The talk was also very innovative in that all the problems have a solution,they must have. Things like our rubbish grid means we will find ways of using the electricity locally through storage or usage. Hydrogen storage for domestic heating and/or transport. Funding will be sought for the little ground that may be available to us at Toscaig Pier and the Surgery for units and/or housing in keeping with needs in both areas. Growing and producing quality Applecross branded products must be a way to strengthen this community and there was chat about how to engage with the younger people’s needs. New rules concerning food waste means that in vessel composting needs to be looked at very seriously in rural parts and that is an area we are planning on a community level. The meeting ended with a question and answer session and was surprisingly short but as so much information was put out, there was much to digest. The only myth that was brought up was the 100 houses the Company were going to build and this was despite our LDO telling us how difficult it was through out all the rural areas concerning the provision of accommodation, how difficult it is to build one. Only two community housing projects are being built in the CAM area, Helmsdale and Iona. So hopefully the fact we were not planning 100 houses in the first place and the problems of building them has put that one to bed for a while but I make no excuse for wanting more people to live here. Would n’t it be nice to be able to pick a five-a-side football team or a netball team and travel to other schools to play.I am old enough to remember an full football team coming over by boat to play Kyle in a friendly. Now our footballers from Camusterrach have to go to Kyleakin to play their football. The LDO pointed out that a doctor had dropped out of the last round of recruiting interview because she did not know how small our primary school was and how difficult it was going to be to find decent accommodation. Does not matter how young or old you are that should ring very loud warning bells.

So it was off to the Inn for a coffee and chat about the meeting and it was very positive. It is never about winning and losing ,there is enough of that going on in the Middle East with horrible consequences and without demeaning any of the horror over there I have felt pretty bad over the past few weeks about some of the reactions here locally. I would be a fool not to have learnt a huge lot more about this community over the last 7 weeks and I think I have. I have managed to keep my views and backed them with,what I think are decent enough arguments, and been reasonable and respectful even to those who have approached me. It is now a time for people to reflect over the winter months what they want for THEIR community. Their was a reflective view from the north coast last night at the Inn concerning the recent petitions and signing etc and how the first one was turned down flat, the status quo one, and how the next one had to be reworded in such a way that the community as a whole could have signed it. As this was in reaction to the LAS campaign, that must mean to me that there is change in the air. People’s evolutionary thoughts about their own community do not go away even if campaign’s come and go and I think we need campaigns like we have just had to concentrate people’s minds and so we do not just fade away as a community. One spokesperson on the CES video said just that. I take heart from the reaction recently in that this community is alive and well and looking to the future for their old and young folk. One of the conversations at the Inn concerned Finbar in that he would no longer need to come for his pint of guiness as he would be able to have that at home and be able to be on skype with his new broadband connection as he had his pint via laptop. Dancing with the girls may prove a problem later in the evening though.

To finish when we got home an email was waiting for us from a young member of the community which did not need any comment but made us smile and think it is all worth it.

“I just wanted to say that was a very interesting meeting,so many exciting possibilites……There is no good reason why Applecross cannot be a thriving community. Especially when there are so many intelligent,practical and forward/sideways thinking people here.” As Meg Ryan said “Yes, yes, yes” Probably a few more yeses but you know what I mean. 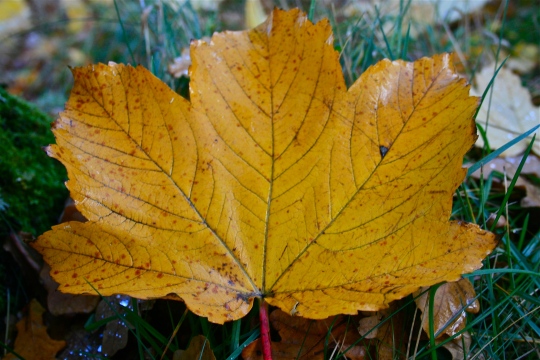 Struggle to find the Applecross photo of the day but realised it was the leaf and the picture of the sycamore tree to show the colour and vibrancy of the community despite it being autumn going into winter. We have a future and it is ours.

Comments on: "Company AGM showing there is Applecrosslife." (2)

This site uses Akismet to reduce spam. Learn how your comment data is processed.